Welcome to urbaneer.com's Home Of The Month feature, which showcases what one of urbaneer's Buyers recently purchased in the City of Toronto. This month we feature the story of some first time Buyers who announced the pregnancy of their first child as we started their housing search - and closed on their new home just days prior to the wee one's birth.

Our clients had always identified a preference to locate on the central east side along The Danforth. Why? In their preliminary research our Buyers found properties on the central east side - from Pape Avenue east to Woodbine Avenue both north and south of The Danforth - offered the convenience of location - subway, shopping, green space and good schools. Additionally, they felt that there was fair value for dollar and indentified a family friendly vibe. The housing stock in this part of the city -  a mix of two storey brick detached and semi-detached dwellings constructed between the 1920s and 1940s - was originally built for the burgeoning working classes when Toronto was a magnet for immigration between the two World Wars. These locations represent some of Toronto's 'early suburban developments'. The housing stock is modest but solidly constructed, and often well-kept and maintained.

These Buyers quickly learned how much demand exceeded supply in the spring, when they lost their first bidding war against 15 other buyers. The 3 bedroom semi-detached 'cottage' with basement apartment, located at Danforth and Coxwell, had been listed aggressively low at $499,000, and spiked 25% over the asking price to a sum of about $623,000. Instead of panicking, our clients adopted a steady, prudent, rational approach to their housing search, carefully analyzing each property for its opportunities and constraints and the subsequent sums they garnered. From that, they created a value matrix that quickly helped them establish where market values lay relative to their own needs, wants and desires. To their credit, they adopted the mantra 'slow and steady wins the race'! 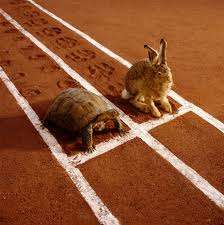 Five weeks later, after our Buyers had viewed around a dozen properties, this 3-bedroom 3-bath brick semi with garage located near Coxwell and Danforth came to market at $549,999 with a holdback on offers 6 days later.

There were a few unusual aspects about this property offering. First, there were no interior photos, no floor plans and no presale home inspection report which has increasingly become standard fare for listings in the downtown core. In today's heated market, top producing realtors make it their mandate to provide as much information as possible in advance of an offering date so buyers have an easier time completing their due diligence. Basically, the more information a listing broker provides, the more likely multiple buyers will submit offers.

Not only did this listing lack sufficient information - especially interior photographs - but the MLS property description emphasized that every room on the main level had ceramic tiling and all three bedrooms on the second level were finished in parquet. With the Sellers' surname being Italian - and a note that it was being sold be under Power Of Attorney - it was pretty easy to deduce that this house had been owned for many years by immigrants who had painstakingly imbued their own cultural aesthetic on the dwelling.

In fact, our buyers - showing signs of exhaustion from the summer heat wave we were embroiled in during the month of July - and the fatigue that accompanies an on-going search for a home -  told us they would pass on seeing the property based on the description and lack of photos.

But we had a niggling suspicion this might be a gem. When previewing the place we discovered a lovingly-maintained family home with a well-constructed extension that created a super-sized kitchen + a main floor bath, a fully finished basement with laundry room, second kitchen and 3-piece washroom, upgraded major building components (wiring, heating/cooling, plumbing, roof) mostly less than 5 years old, and yes! - a symphony of parquet and tile floors. Oh, and a marble staircase! 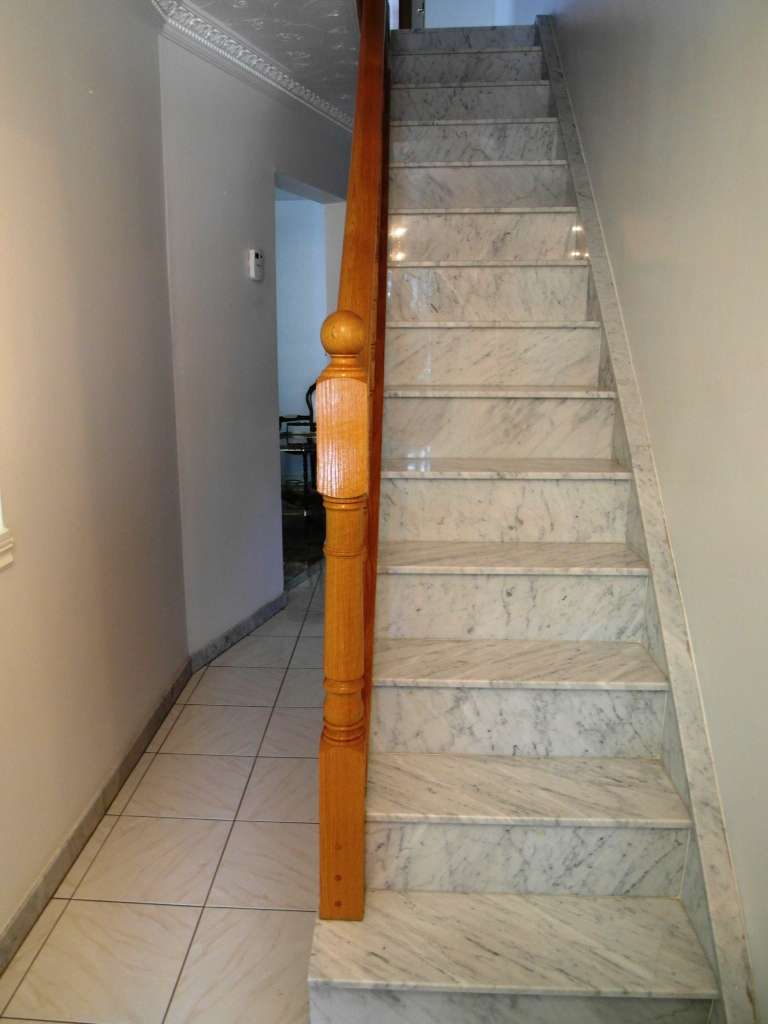 Despite the distinct cultural stamp that would not be to everyone's taste, this house had an infusion of good energy that one only finds in home well-loved by a close-knit family. Our Buyers felt it, and the more time we spent in the house the more we realized that even the quirkiness of all that tile was an opportunity unto itself. Amidst the sea of newly renovated homes with their ubiquitous big box store fittings that lack personality, this house brimmed with it. And it suited our buyers perfectly. Even the golden orange tile floors with marble baseboards in the living and dining rooms present a unique opportunity to create a mod-setting. Can't you envision a 60s teak sideboard looking swish in here?

Here are some pics of the interior and rear: 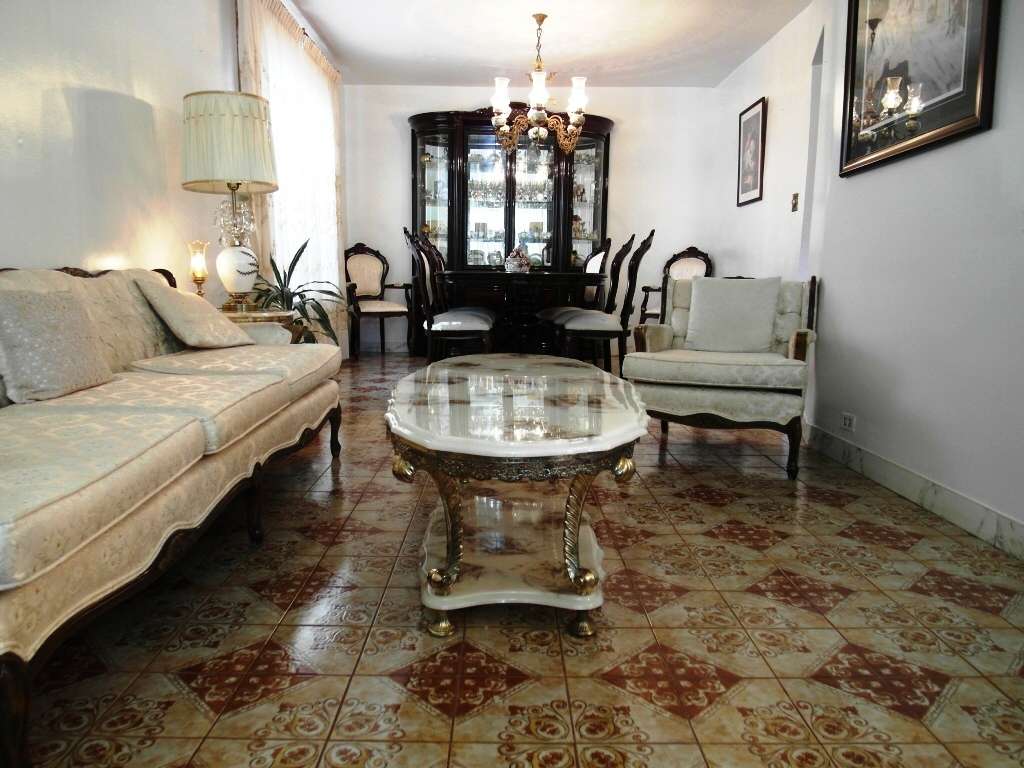 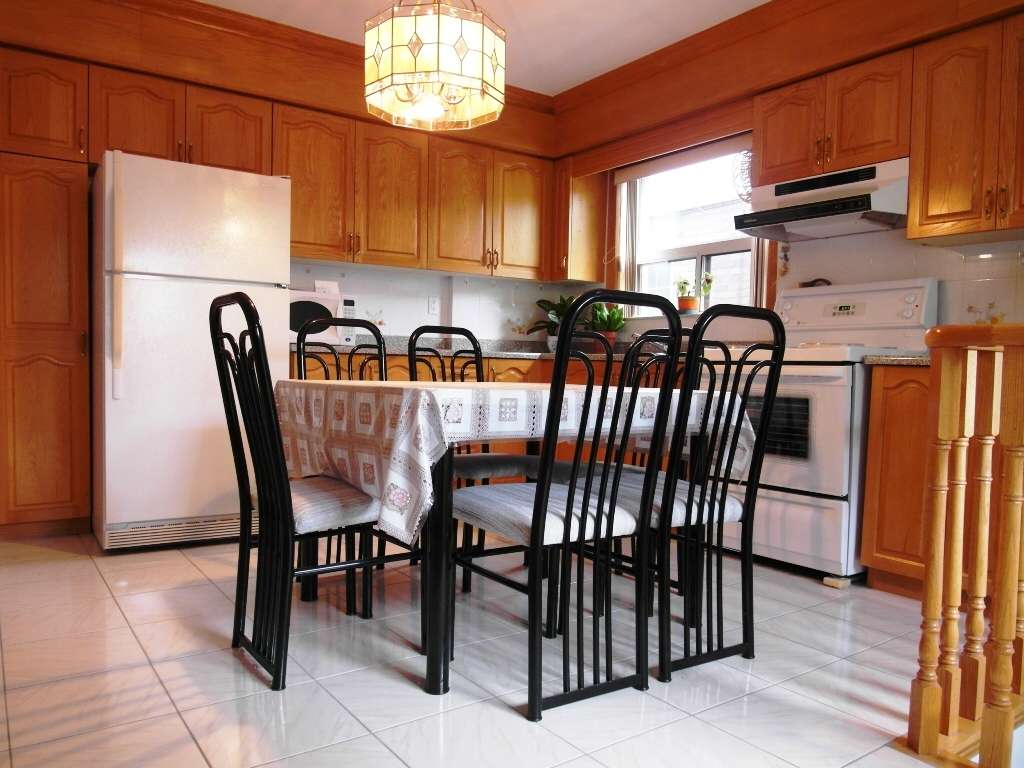 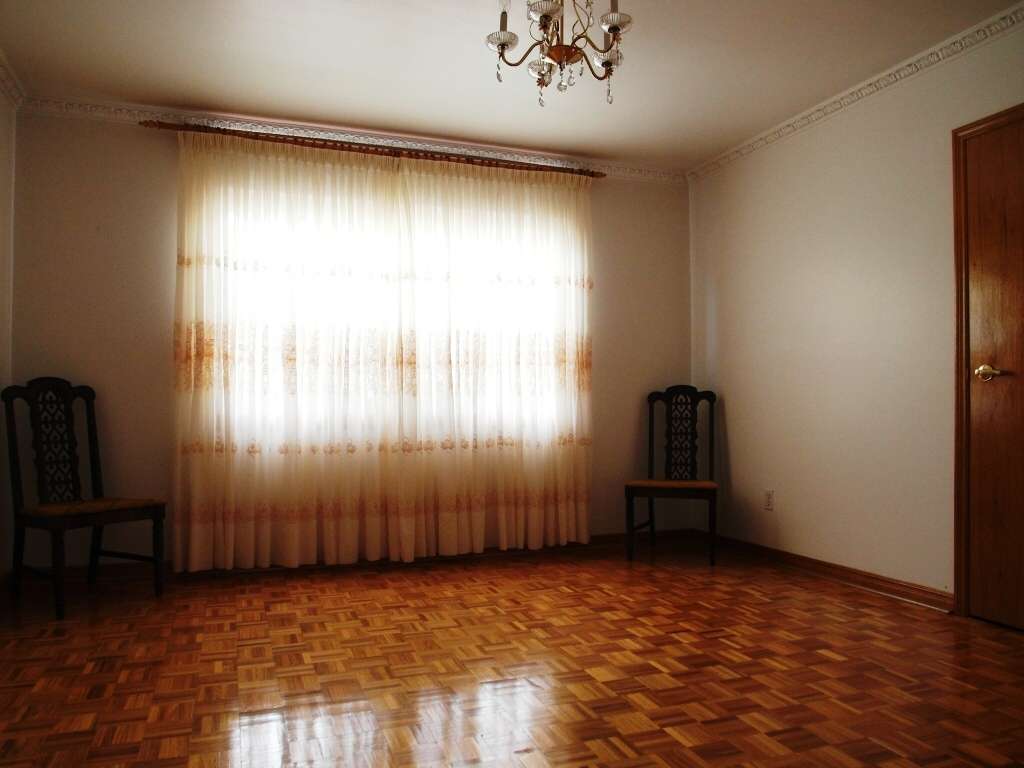 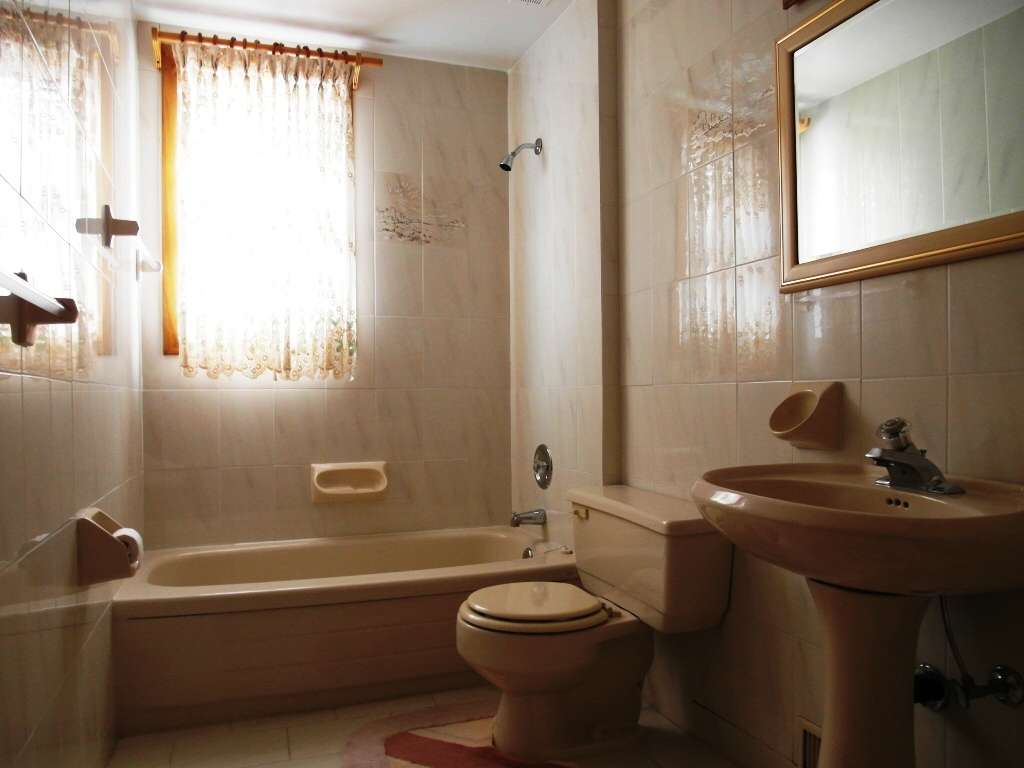 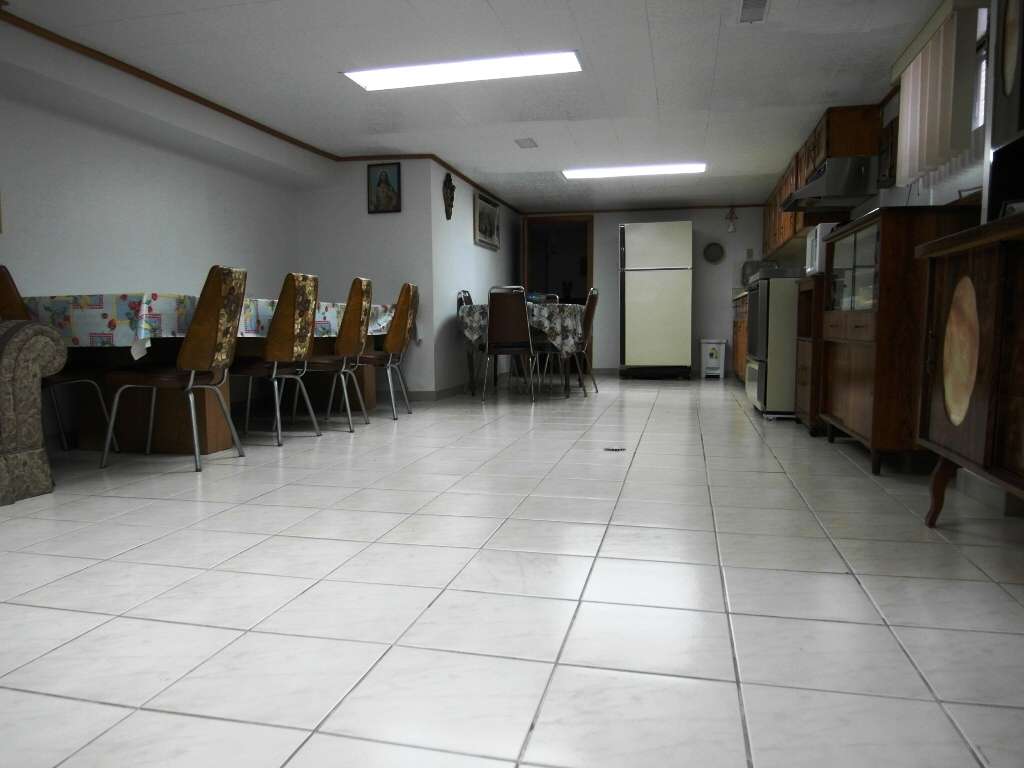 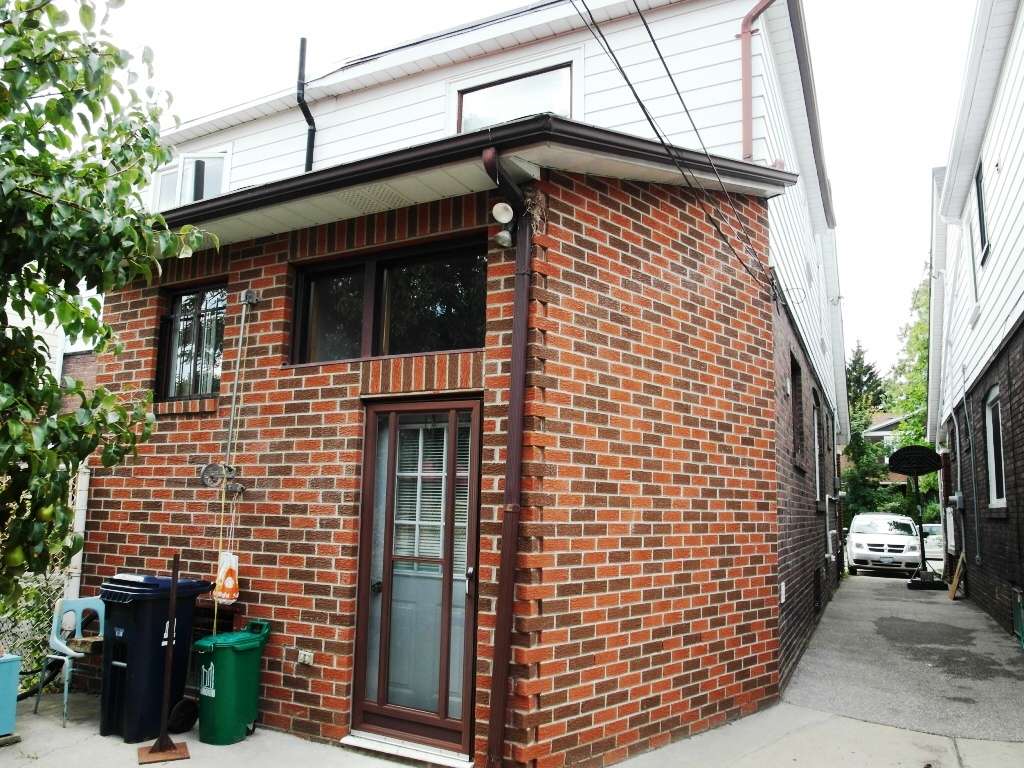 Whether it was the lack of photos, limited information, or the aesthetics of the house, this property only received two offers. It may well have been the lack of exposure, and the fact the Sellers had decided to review offers on a Sunday at 5pm in the heat of Summer. Frankly, one should never review offers on a Sunday, for a listing realtor should provide at least Monday for buyers to confirm their financing with their lender and obtain a bank draft for the deposit in advance of offering. Worse still is a Sunday in July during a heat wave. That's when most people - buyers and realtors alike - are catching a break celebrating the peak of Summer, whether that be at a cottage or in town, barbecuing with family and friends. Had the Sellers waited until a weekday, I believe they would have attracted more interest.

No complaints here however, for competing against one other buyer would be to our advantage, albeit not without complications.

At presentation - with a condition-free offer, a substantial bank draft and an endearing hand-written note from our family-to-be-buyers in hand - it was revealed this was an estate sale of which probate had yet to be completed. As a result, the quick closing suggested by the listing agent - which allowed our buyers to secure the lowest of interest rates - was now impossible. To complicate matters, the Power of Attorneys for the estate decided that, despite their $549,999 list price, they now wanted $700,000 for the house and not the highest sum on the table. This was distressing to both sets of buyers, who had invested several hundreds of dollars getting pre-purchase home inspections in advance of the offer date.

In what appeared to be nothing less than the heightened drama one sees in a cheap reality tv-show, the other Buyer broker had a ballistic meltdown on the front lawn when he discovered his Summer Sunday had been ruined by the family of an estate who wanted an impossible $700,000 for this "parquet and tile" house. In fact, to the amazement of our Buyers and I, this realtor got so upset he continued to spew a barrage of vitriol to the listing broker and the family before storming off in a rage. I've never seen a face so red. Fortunately, for my Buyers, he destroyed any chance in successfully negotiating for his clients. The Sellers were appalled at his behaviour.

As the wheels of his SUV screeched down the street, I ushered our Buyers into the house to meet the family, offer our condolences at the news of their mother's passing, and sit down in the basement so we could resubmit an improved offer $42,000 higher than our initial bid. We wanted to demonstrate our good intentions. It was during this time we learned from the children - now in their 50s and 60s - that their parents had immigrated from Italy in the 1950s and bought this house where the four children had been raised. They shared with us their stories of digging out the basement themselves, building the extension with their father, helping mom with the garden, and the family rituals of making tomato sauce and Soppressata. My Buyers told them how they hoped to continue the traditions of family, as they embarked on their own next chapter of life as new parents.

It took five days for the family to decide to accept our Buyers' offer of $629,100, but not after an investor bid $650,000 with the hopes of converting it into an income property. At the end of the day, the Sellers realized their mother would truly prefer a young couple starting a family to carry on the domestic traditions of a well-loved place. than letting an investor use the dwelling as an income generator.

The process of finding a Home to buy is a journey unto itself. And it's different with every client. But, as we've learned at urbaneer.com over our two decades of experience, it always works out for the best.

If you, or someone you love, is looking for a great opportunity, please know finding 'dream homes' is our commitment at urbaneer.com.

Interested in learning more about the east side? Click here to read one of our past posts called 'Why The East Side Has Historically Been Cheaper'.

Like what your read? Consider signing up in the box below to receive our FREE monthly newsletter without pressure, or hassle!

Other Posts For The Danforth