After a few months of searching the downtown core east to Leslieville for a starter condo under $325,000, my Buyer suggested we look at a newly registered condominium on Heintzman Street located at Keele and Dundas West in The Junction. While I adore The Junction for the character and scale of its vintage architecture, and that cool gritty-residue of former industry that is increasingly rare to find in our sanitizing City, I was initially a tad reluctant for my Buyer to purchase in this area. Having been trumpeted as 'Up and Coming' for over twenty years and requiring a seven minute bus ride to the Keele Subway station, instead of the more accessible east - west streetcar lines found in trendier gentrifying locations, I wasn't convinced purchasing here would provide a solid return on investment. However, after our visits, I became convinced this location is definitely on the verge of rebirth.

Wrapped by a busy rail corridor arcing around it to the north and east, tony High Park to the west and Bloor Street to the south, this neighbourhood is named after the junction of four significant railway lines. Originally known as The Village of West Toronto when it was founded in 1884 at the intersection of Dundas and Keele Streets, this area evolved as a working class manufacturing community consisting of foundries, mills, meat processing factories, and furnishing companies, including the Heintzman Piano Company. The abundance of work and newer housing attracted the Irish Catholics, many of whom moved from the poor, crowded tenement housing in areas of the city such as Cabbagetown and Brockton Village during the 1880s, followed by waves of working-class English labourers from Birmingham and Manchester in the early 1900s, and then Italians, Poles, Macedonians and Croation immigrants as our city (and country) boomed.

At the turn of the century, The Junction had a substantial and prosperous commercial strip supported both by residents and a large labour force. But over the past 100 years the shifting economy, combined with advancements in mechanization, reduced the working labour force. Meanwhile the culture of the automobile, the birth of the shopping centre and arrival of the big box emporium prompted the resident population to shop outside the area. Like many other pedestrian-reliant urban villages, The Junction's commercial vibrancy could not ultimately be sustained, though it was exacerbated by a circumstance unique to The Junction. On April 30th, 1904, the residents of this Toronto west end neighbourhood voted to have their neighbourhood go dry to end the ongoing drunken rowdiness and constant fighting between the men who worked in the railway stockyards. What began as part of The Temperance Movement continued in a display of true Toronto conservatism. For almost a century, a series of failed referendums maintained the alcohol ban in The Junction until 1998. I suspect the long absence of establishments serving liquor had prevented this area from becoming a destination like other urban villages that have revived out of our citizen's love for food, drink and socialibility. 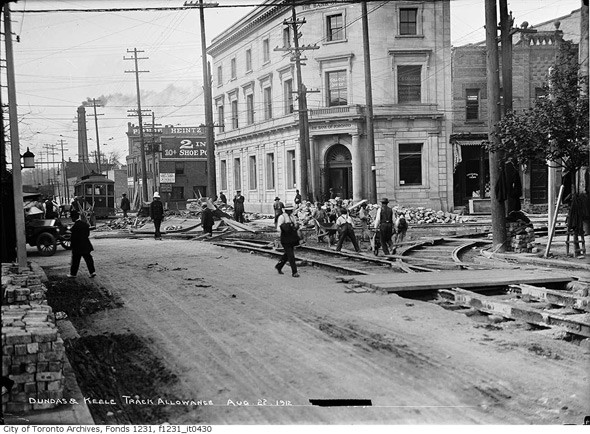 When it came to viewing this condominium, my buyer revealed that she has enjoyed visiting the art galleries and coffee shops in The Junction for the past year now. Touting it as one of the last vestiges of funky in our city, it's true there's a certain fringy-edginess that feels like the Queen West or Ossington Avenue I strolled ten to fifteen years ago. But as much as I appreciate the vibe of cool urbanity, I wanted to be sure there were enough signs of change to suggest this neighbourhood could be near a tipping point. My own rule of thumb as a realtor is to ensure where you buy is not only a great place to live, but an asset that will ultimately provide a solid return on investment.

For decades, The Junction has been resident to working-class long-term now-retired owners, a lot of temporary renters, and a cycle of first-time entry-level buyers. These cash-poor high-financing first-time buyers typically purchase on the basis of affordability, complete a few do-it-yourself renovations to create some equity, and then sell to leverage their profit and exit to a more desirable neighbourhood. A neighbourhood that has a rotation of renters and first time buyers can often be transient. This hinders establishing community bonds and kinship, keeps commercial storefronts vacant, and inhibits the collective synergy necessary for neighbourhood revitalization.

Yet with these factors for decline comes rebirth.

Many in our city of neighbourhoods have seen this occur in some form or another, including Cabbagetown in the 70s, Riverdale in the 80s, College and Queen West in the 90s, and Roncesvalles and South Riverdale in the 00s.

In the case of South Riverdale, the commercial rents on Queen East dropped so low in the late 1990s it became affordable for creative entrepreneurs specializing in vintage home furnishings market to set up shop. As Queen East developed a reputation as a funky design destination, the increase in pedestrian traffic attracted food and beverage establishments. As the street's popularity expanded throughout the day and evening, it caught the attention of Starbucks, who quickly secured a space. This, in turn, served as a signal to condominium developers to launch new infill projects, fuelling the conversion of several former factories into loft condominiums, and attracting more family-oriented buyers to outbid each other for the conveniently located, character renovated, housing stock. It even prompted a neighbourhood name change from what had been regarded as Prime Riverdale's poor sister 'South Riverdale' to a newly invented and somewhat contrived 'Riverside', and an increased association with its next door neighbour 'Leslieville'. Over seven short years Queen East has gone from ho hum to a scorching hot destination neighbourhood. To read more about the evolution of Riverside and Leslieville, click HERE.

The Junction has enough cues to proclaim "Watch Out!", even in its infancy. Unlike South Riverdale, which had the condominium developers following the rebirth of the commerical strip, The Junction will see its commercial strip blossom becuase of the needs and desires of around 1000 new residents occupying two newly-registered, 16-storey condominium towers containing around 600 suites steps from the corner of Dundas West and Keele. It is precisely for this reason that I wanted my Buyer to be one of them. It is the kind of population boost a neighbourhood needs to undergo revitalization.

Developed by Delterra's Options For Homes, my Buyer and I viewed several units over the course of a month. Although the building is somewhat monolithically conventional, we were pleasantly surprised by the quality of the finishes and the attention to detail that is frequently lacking in most new construction. The complex has appropriately scaled amenities, abundant guest parking, and several smart features including a green roof and solar panels for heating water. The suite my Buyer secured for $10,900 under its list price of $299,900 boasts around 600 square feet of well-proportioned space. Configured as a one bedroom and den, the unit has top of the line stainless steel appliances, stone counters, wood flooring, a spacious balcony, one car secure parking and an oversized locker. Situated on the 15th of 16 floors, the unit boasts a panoramic south east view overlooking the city centre, Lake Ontario, and all of High Park. After a lot of comparison and viewings, my Buyer and I agreed this suite would have cost upwards of $40,000 more in the downtown core.

Here's two of the MLS pics showing the kitchen and the vista:

Steps away from this view, located on Dundas West at Keele, are several commercial enterprises that are fresh, unique and an indication of where this 'cool neighbourhood with an edge' is heading. There is already a burgeoning mix of art galleries, home design shops (one of my favourites is www.Mjolk.ca), fashion houses (www.shoptrapdoor.com) and great eateries including Rawlicious, a vegan raw food restaurant (www.rawlicious.ca). There's even a new Starbucks at Quebec Avenue!

This was a great first time buy. In fact, a suite subsequently came to market with fewer upgrades, a less functional floor plan, and no city view, yet it went into competition and commanded a sum higher than my Buyer's acquisition price. Score!

** Vintage Photo Of 'The Beaver Cinema in 1913' On Dundas West from http://silenttoronto.com/?tag=the-junction-toronto. Super Interesting!