A Nose For Leslieville

One of the challenges we Canadian realtors navigate up here in the Northern Hemisphere, beyond the renowned arctic winters, are the limitations of showing properties to buyers once daylight savings time kicks in. On November 7th when the clocks rolled back one hour, life certainly became brighter for the early riser. But for realtors, who often work until 8pm on weeknights showing properties to the after work crowd, our jobs became alot darker. While the sun rose at 7:16am this past Friday, it subsequently set at 4:48pm. So by the time I met my folks at 6:45pm to view the week's hottest house under 600k still requiring work to hit the market in the downtown east side's hip Leslieville neighbourhood, the street was aswirl with dead leaves tossed by an angry wind, the temperature was plummeting a degree below bitter, and the sky was rendered pitch black by inky clouds and a long departed sun. It rendered an examination of the property's exterior building components impossible which, if I may state the obvious, is never ideal when you're purchasing bricks and mortar.

I adore the neighbourhoods of Riverside and Leslieville which run along Queen Street east of the Don Valley towards The Beach, though their exact neighbourhood boundaries are a bit murky given this area has spent most of its life being called South Riverdale. As the neighbourhood has developed its own cachet and prices have skyrocketed accordingly, it has jettisoned the South Riverdale moniker for names that sound more, shall we say, fresh. And why not, when for a near century residents have been regarded as the poor sister to tony Riverdale proper whose boundary runs north from Gerrard Street East. The name change has been more aggressively adopted over the past decade, matching the pace of the neighbourhood's revitalization which, I might add, has been a topic of fascination by urban academics for the past forty years. I know this from my own contribution to the research in the late 80s when I wrote an Urban Studies Thesis funded by The Ministry Of Municipal Affairs called "Gentrification: Yuppie Porn In South Riverdale". The thesis, which included a comprehensive review of past research exploring the movement of middle class households into this working class neighbourhood, also explored my early fascination with housing as a symbol of self.

The results were a fascinating indication of current and future housing trends. My research analysis quantified the original and upgraded housing stock as being principally occupied by long-time Anglo working-class residents and Chinese immigrants; the houses which had varying degrees of renovations tended to be more recent residents whose purchase was based on affordability and their willingness to complete the all-apparent do-it-yourself renovations; while the Yuppie Porn houses were, without exception, young highly-educated high-earning professional couples with no children who had neither the time nor inclination to renovate. These upwardly-mobile income-rich cash-poor Yuppies were leveraging themselves onto the property ladder to their max, and in the process acquiring the most luxurious property as close to the financial core as possible. The one compromise they were willing to make was choosing a location which, although convenient to work, was marginalized by the dilapidated properties that surrounded their castle, the mixed bag of residents who were their anonymous neighbours and, at the time, the presence of toxic noxious industries to the south. Sound familiar? Gentrification is alive and well in South Riverdale, er, Riverside and Leslieville today!

If you'd like to learn a bit more about Gentrification, here's my past HomeWatch newsletter called Gentrification In The City: Understanding Rejuvenation of Inner City Neighbourhoods.

My Urban Studies thesis fulfilled the requirements for degree accreditation, fueled my interest in housing as a symbol of self that would propel me into graduate school, while serving my own vested interest in the neighbourhood. How so? South Riverdale was the location of my own first purchase back in 1986 when my partner and I bought a barely habitable cat-sprayed cockroach-infested symphony-in-pink two bedroom semi for $87,000. It was a definite contender for being the cheapest house in the entire city and, as a full time university student slash waiter, was one of the few properties available within our shoestring budget. Here's a pic: 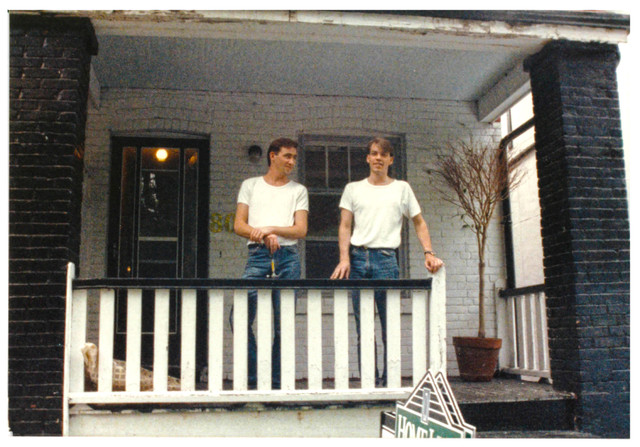 Although from the age of seven I knew I would have a career in housing, until you purchase your first home you will forever remain a real estate virgin. At the tender age of 21 I gave myself up for the overwhelming satisfaction for home ownership by purchasing the only house we could afford that didn't contain tainted urea formaldehyde insulation. Elated and aspirational with desire from the point of purchase until closing, on moving day my mood dramatically changed at the horrifying realization of what we had done. Walking into a crappy ghetto of a property with absolutely zero redeeming features and an extensive list of must-dos, despite my brave face and stiff upper lip, within the hour of getting the keys I broke down crying. By the next morning, having awoken to a lashing thunderstorm which had ripped off a section of the poorly patched roof leaving raindrops and tears pouring in the kitchen, I succumbed to the daunting realization we had bitten off more than we could chew. Whatever momentary pride I might have fleetingly held under the sanctity of homeownership, within 72 hours I had to concede defeat by wailing to my partner how I simply could not live there. Three weeks later, with alot of sweat equity and a $3000 cash advance on the newly-acquired Visa that accompanied our entree into the exclusive perks of homeownership (here, have some more debt!), we sold our $87,000 house for $121,000. It would signal the beginning of my climb up a property ladder which, over a span of twenty-five years has criss-crossed seven Toronto neighbourhoods, both Canadian coasts, and currently totals 14 personal residences enroute to the next. Despite the tears, frustration, and "Why the hell do I do this?" proclamations rooted in success and failure, I cherish how it satiates and honours my creative expression.

And, after 24 years since losing my real estate virginity, perhaps one might say I had a nose for Leslieville? Even then one could smell the opportunity. After showing the neighbourhood's latest hot property on the market in the pitch dark on Friday, I met my darling friend and Leslieville resident Kate at "The Nose" for a bite and catch-up. Affectionately known for its huge fibreglass nose plastered across the front of this otherwise unnamed former bank building, this funky Italian restaurant is properly known as 'Gio Rana's Really Really Nice Restaurant'. Located on Queen Street East at Leslie, this vibrant destination with an eclectic crowd offers tasty food at reasonable prices in a loud quirky setting. Perched at the bar (best for people-watching!) we spent the evening grazing on fried calamari, fresh pasta in a tomato basil sauce, grilled salmon, osso buco and a plates of rapini and sweet potato mash while yakking about the uncanny parallels of living lives with birthdates only five days apart.

I'm a fan of 'The Nose'. It's the ideal combination of flavourful food coming from a kitchen that cares, attentive service from super adorable friendly staff, and absolutely zero pretense. There's nothing fussy here. No one's trying too hard. Gauging from our people watching, everyone was having a good time, except maybe those waiting in the lengthy never-ending line.

Not only am I frequently selling unique urban homes in Riverside and Leslieville, but I constantly frequent the restaurants and retailers of Queen Street East as it undergoes an amazing rebirth. Here's some past blogs including dining at Table17, Goods & Provisions, and Belmonte Raw, home furnishings from Snob and Guff, plus a pet paradise at Paws Playgrounds.

- we're here to earn your trust, then your business -

*Like what you've read? Did you know we were recently listed as one of The Top 25 Toronto Real Estate Agents To Follow On Twitter! and The Top 50 Blogs On Toronto? Consider signing up in the box below to receive our FREE monthly e-newsletter on housing, culture and design including our love for unique urban homes and other Toronto real estate!

The Art Of Displaying Art

We Wish, Then Burlesque at Yonge ‘n Bloor